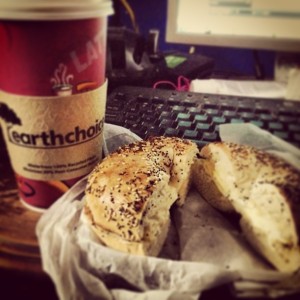 As I sit on this slightly chilly Friday in Upstate York, I am perfectly content.  I have my Chai from one of my favorite places to eat here, First Cup.  I also have a delicious breakfast sandwich on an everything bagel – which does nothing for my breath but everything for my soul. Music in my ears and snow falling gently outside, with my best friend sleeping in a curled up pile of shedding fur on my bed.

It’s been a long time since I’ve posted and so much has happened! I have no idea where I could even start.  So let’s just address the biggest things and I’ll attempt to fill in all the rest later on in other posts and side stories.

Last August I got an iPhone which in itself is not all that important other than I’ve become an app fiend.  Play me on Ruzzle! Dice with Buddies! Magic Piano!  I found a calorie / workout app called MyFitnessPal that has since changed my life.  I started keeping a food diary in mid August and while I haven’t done it every single day I’ve been brutally honest about portion sizes and overeating so I can learn.  Since then I have lost 30 pounds.  In January I decided to take it up a notch and got a Gym membership to Planet Fitness.  I love it, nothing clears all the stress of work and a long distance relationship than planting yourself firmly on an elliptical trainer and just blasting music and “running” for an hour.  I can already see noticeable changes!  I’ve been trying to do my Zumba on days when I can’t make it to the gym.  I’ve also been trying really hard to change my entire eating life style.  I use Skim Milk or Almond Milk, whole grains instead of normal white or whole wheat, Vegetarian and vegan alternatives, smoothies, ect.  It’s been going pretty good but every now and then I’ll have a “cheat” meal so I can stay on track and not get run off my health road by cravings.

I only have one downfall.

This Chai is like my crack.  I’ve had three this week.  Bad Nemmie.

I’m going to try and get back to my SuperFruit Green Tea by Good Earth to deter myself from slipping into the delicious silky smooth flavor of Oregon Chai.

This evening I’ll be experimenting with a Gluten Free Brown Rice Pasta and Almond Milk to make Mac and Cheese for dinner, I’m a bit nervous. I love my Mac and Cheese.  I’ll cry if it tastes bad.  Bawl even.

Work has been work.  I’m looking forward to training in the Cash Office if I can ever get time to get in there and learn.  I’ve been trying really hard since New Years to get Full Time status so I can get my own place and start working on making my Long Distance Romance a Not-so-Long-Distance one.

I’ve had some health problems lately.  I was put on Trazadone for insomnia  and it’s been working, it’s so wonderful to finally get some sleep.  I was also diagnosed with an Ovarian Cyst last August and rechecked in November.  Still there.  My Birth control keeps her (I’ve named my cyst Francine, after four months of constant cramps and pain) at bay for the most part and keeps Francine from growing but as a naturally anxious person I have a lot of worries about just the fact that I have a Cyst and that there’s really nothing being done about it. I wish it was as easy as serving a body eviction notice.  Get Out Ms. Cyst, don’t come back. 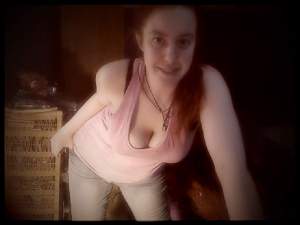 Time to get back to the real world and paying the rest of my months Bills.

Recently in my Life…