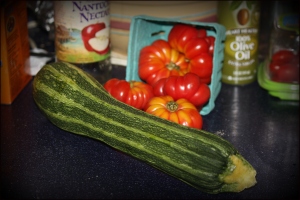 Heirloom tomatoes.  Seriously, my one true love – after cheese…and Pierogies…it’s becoming clear to me that I love food just a little too much.

I’m not a big fan of tomatoes in general unless they’re diced, cooked and in a chili or stew.

But Heirloom Tomatoes are different.

I love these babies raw, or in a salad, or baked in a galette or frittata.  There’s something about their fresh summery taste that I look forward to all year until I can taste it again.  If you’re into a spectacular tart I’d suggest you over to Recipe Girl’s Rustic Tomato and Zucchini Tart I subbed in Heirloom tomatoes and Havarti but this was divine.  The tart was unique and one of the first crusts I’ve ever made! Got my arm workout in that morning cutting the butter into the flour.  This morning I used the last of my little mini heirlooms in a summer frittata that also used up the rest of my zucchini. 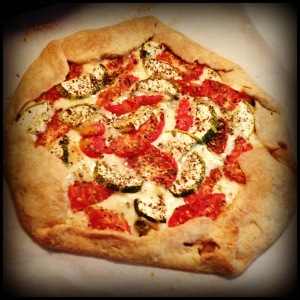 Word to the wise, When you make a frittata, don’t fuss around the try to make it healthy by using one egg and 8 egg whites.  Save that nonsense for a scramble.

I definitely want to try making that Galette crust with oat flour.

I’ve been reading a few books as well.  Between the Book Thief and The Good Luck Girls of Shipwreck Lane all my reading time seems to be filled up.  The Book Thief is nothing of what I initially thought it was, having never read any reviews or the back description I had no idea it was a World War II era novel.  From an incredibly unique point of view though.  The Good Luck Girls of Shipwreck Lane by Kelly Harns has personality and sass.  I haven’t read much of it, but I’m already in love with one character and I’m sure on my way to the same status with the second.

What Books are you reading these days? Any new author recommendations?

Recently in my Life…